Why I’m Snubbing the New IPhone for an Android Galaxy

The world’s best-selling smartphone may not be tops when it comes to navigating life during a global pandemic. At least that’s what I discovered — and it’s why I ditched my iPhone.

Normally, swapping out an iPhone for a competing device just weeks ahead of Apple Inc.’s annual September iPhone launch isn’t considered the smartest move. But that’s exactly what I did earlier this month. After finding a good deal, I traded in my two-year-old iPhone 11 Pro for Samsung Electronics Co.’s Galaxy S21 Ultra, which was initially released in January and runs Alphabet Inc.’s Google Android operating system. Despite opting for a dated handset over Apple’s next new thing, I’m happy I made the switch.

To be clear, I did not make the decision blindly. Thanks to reporting from Bloomberg News’s Mark Gurman, I have a good sense of the kind of new features I can expect with the next-generation iPhone. The likely incremental nature of the upgrades made me more comfortable doing the swap. In July, Gurman reported Apple’s 2021 models will have some modest improvements — including a faster processor, better camera and improved displays. But it reportedly won’t incorporate an in-display fingerprint scanner. That last point is one of two key reasons the Samsung phone is more usable in a Covid-19 world. 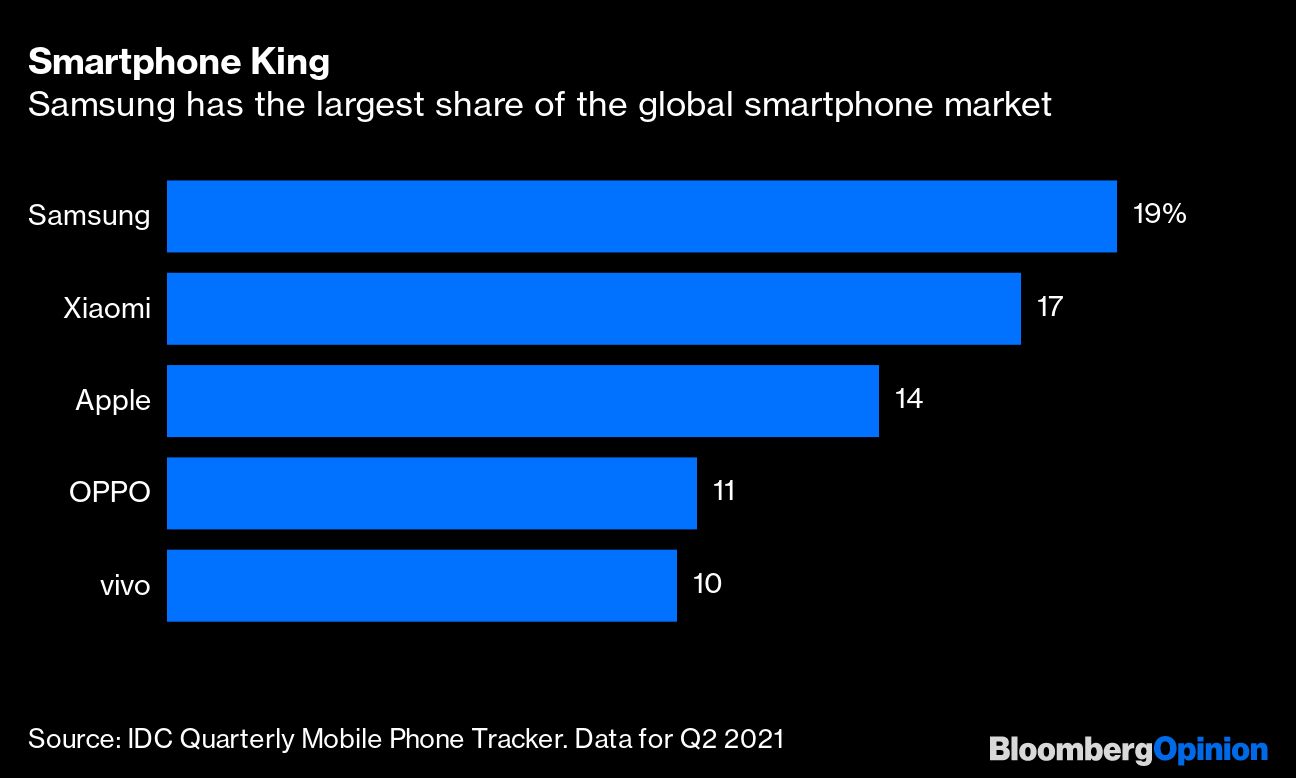 IPhone owners all know masks and the iPhone’s FaceID face-reading technology do not mix. In contrast, the S21 Ultra’s fingerprint reader is extremely convenient. True, iPhone owners can avoid the trouble of having to yank down their masks and show their faces every time they want to unlock their phones by changing the settings to allow for a typed passcode to be used instead. But that means giving up some of the extra security inherent in biometric authentication. Beyond that, the Samsung phone camera’s more powerful optical zoom enables users to take clear photos farther away from the subject, a plus in an era of social distancing. But perhaps the S21 Ultra’s best feature is its display.

Even though it came out months ago, Samsung’s screen will likely remain the best. Nearly every technology reviewer has raved about its beautiful colors and increased level of detail. I agree. It also employs technology that updates the screen frequently, making it more responsive and easier-to-read when scrolling through social-media feeds and webpages. (A similar refresh-rate feature may become available in one or more of this fall’s iPhones, according to Gurman). And the screen is stylus-capable, making it great for jotting down notes or marking up any electronic documents.

Of course, not everything was seamless in moving from Apple’s iOS operating system to Android. It took a few hours to set up the device — including transferring my contacts and installing apps. Ironically, the most problematic issue was trying to get Apple’s AirPods Pro ear buds to work because the wireless connection kept dying. It forced me to buy another set specifically made for Android phones.

Yes, I know most iPhone diehards would never think of switching. But for those with an open mind, other smartphone options are available with more advanced hardware at a lower cost. Many Android phones are discounted significantly after release. And with Apple’s history of adopting Samsung’s hardware features — from wireless charging and OLED displays to the larger screen sizes that arrived with the iPhone 6, by switching you may well be getting a taste of the future.

For me, it has been a dramatic upgrade, making my life more productive. If you don’t mind being a “green bubble” in your iMessage chats, you might consider doing the same.