Sadly, this game will only be available through March of next year.

In a surprise Nintendo Direct presentation this morning, Nintendo announced a slew of games celebrating Mario’s 35th birthday. One of the most intriguing things on the menu is Super Mario Bros. 35, a battle royale-style reimagining of the original Super Mario Bros. game. As the name suggests, 35 players battle to be the last one standing. Judging from a piece of key art from the game, it looks like each player will run through a level, and defeating enemies sends them to another player’s level, something that could get pretty overwhelming and completely change the way you attack a given level. Naturally, there are special items that can help you along the way, as well. 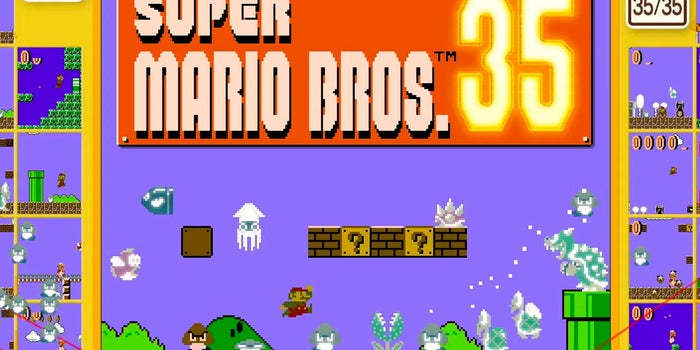 Like the Tetris 99 battle royale game Nintendo released last year, Super Mario Bros. 35 doesn’t cost anything to play, but you do need a subscription to Nintendo’s Switch Online service. Fortunately, we don’t have to wait long to see how this all plays out, as Nintendo says the game will launch today.

Related: How to Become a Successful Gaming Entrepreneur

Switch Online subscribers are getting another nice piece of Mario content today, as well. The original Super Mario All-Stars for the Super NES is coming to the Switch Online library of classic games. This game included 16-bit remasters of the original three Mario games for the NES, as well as Super Mario Bros: The Lost Levels. That last title is the direct sequel to the original Super Mario Bros. but ramps up the difficulty significantly. If you want a platforming challenge, this game will certainly test your skills. It’ll be a good companion to the just-announced Super Mario 3D All-Stars, which collects three of the best-known 3D Mario adventures.