Not a Coach, Not a Player but he must have been the smartest one.

Ramón Rodríguez Verdejo has been in football for more than 30 years, but there is every chance you have never heard that name. You might, however, know him better by a different one: Monchi. He was never considered a star on the pitch but, now aged 52 and having swapped his kit for a suit two decades ago, he is arguably the most recognizable and revered figure at Sevilla, the hometown club where he has spent almost all his career.

You could even reasonably suggest that his success, and the methods behind them, have transformed the job he has performed for 20 years – that of sporting director.

As a player, Monchi – an alternative Spanish name for someone called Ramon – spent 11 years at Sevilla, mostly as a back-up goalkeeper. He played 126 games for the club – the only one he represented – until his retirement in 1999. The following year, he was appointed to the role he has since made his own. At the time, with no experience and with Sevilla in the Spanish second division, Monchi studied other clubs’ methods in order to seek inspiration for his own. FC Porto and Lyon were among those he looked at – clubs who won titles, sold their stars, and started over again.

The main lesson was to accept losing your best players, but make sure you replace them with someone of similar quality for a good deal less money.

Sevilla didn’t spend a penny on transfers during Monchi’s first two years yet still managed to build a team that returned to La Liga under current Armenia head coach Joaquin Caparros. It wasn’t until the following season, in 2002, that Monchi was given the green light to make his first investment: 500,000 euros on full-back Dani Alves, who first arrived on loan from Brazilian club Bahia. Six years later, Barcelona would pay about £23.5m to sign a player who was arguably the best in his position for a decade.

The Monchi revolution had begun.

By the time he left – seeking a different challenge – he had helped the club earn around £180m in profit from transfer dealings. He is back at the club that he loves now, where he is widely respected and where on a typically bright Andalusian day thoughts are turning to Wednesday’s Champions League meeting with Chelsea – with the winner of the game likely to top their group. 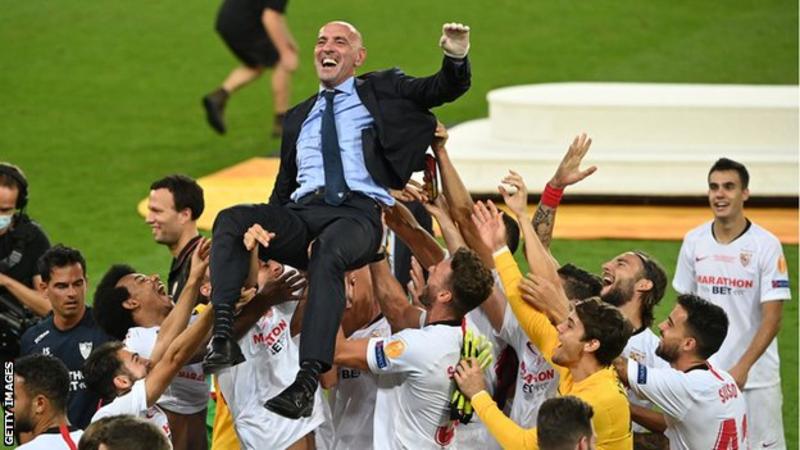 After a year unlike any other, both clubs can take comfort from their already guaranteed progress to the knockout stages.

“The truth is it has been quite an intense time, facing unknown scenarios and managing issues that go beyond a sporting director’s responsibilities,” Monchi tells BBC Sport. Negotiations have been a little bit more complicated. We had to rely on the work we had already done before lockdown. We assigned new tasks to our scouts, who reviewed, again and again, outstanding players we had been following for a while. We even planned different signings depending on future scenarios, including the cancellation of La Liga.”

The signing of Ivan Rakitic is perhaps the standout of several typically shrewd moves executed by Monchi and his team in the south of Spain this summer.

The Croatian midfielder was signed for about 2.5m euros from Schalke in 2011 and left in 2014 for Barcelona in a deal worth about 20m euros. In September, Sevilla agreed a nominal 1.5m euro fee to take him back, now aged 32. While those deals are standard practice for Monchi, things have changed for him in 2020 – or rather, the Covid-19 crisis has accelerated change that was already underway. It has led to a major boost at the club’s new data-driven research and development department, which was created in May 2019.

The scouting process in football is evolving quickly, and new forms of data are becoming increasingly valued. New stats and metrics such as expected goals (xG) are taken into account when making transfer decisions.

An increasing number of elite football clubs are trying to get the most out of the numbers, as has been done in baseball and basketball for years. Many of those employed tend to have no football background, but it doesn’t matter as long as there are results.

“We compare the subjective point of view of our scouts with data’s objective criteria,” Monchi says. “The fact they both almost always agree encourages us to make decisions. We trusted big data more this time because we have a more developed big data department. Although our platform is not 100% complete, it has helped us much more when analyzing interesting players. Our data was not as accurate a year ago as it is today”.

“We had ‘small data’ years ago. A scouting report on Microsoft Word was data. If a player is right or left-footed, that’s data too… Obviously, now we have better-processed data, more information and we are more willing to rely on it. Confidence comes with use. You don’t use something you don’t trust. Nonetheless, we can’t disregard the subjective point of view of a scout. What we have to do is to join both approaches.”

Monchi and his team plan to expand this data revolution to also help inform various other sections of the club’s operations, such as ticketing and marketing.

Due to Monchi’s success at Sevilla, an increasing number of football clubs have tried to follow their model. Clubs such as Benfica, Sporting Lisbon, Monaco, and Ajax have flourished… and make even more profit than the Andalusians. Others have preferred to rely on Monchi disciples, such as Víctor Orta, who spent seven years under his tutelage and now fits in well with Marcelo Bielsa’s Leeds United. 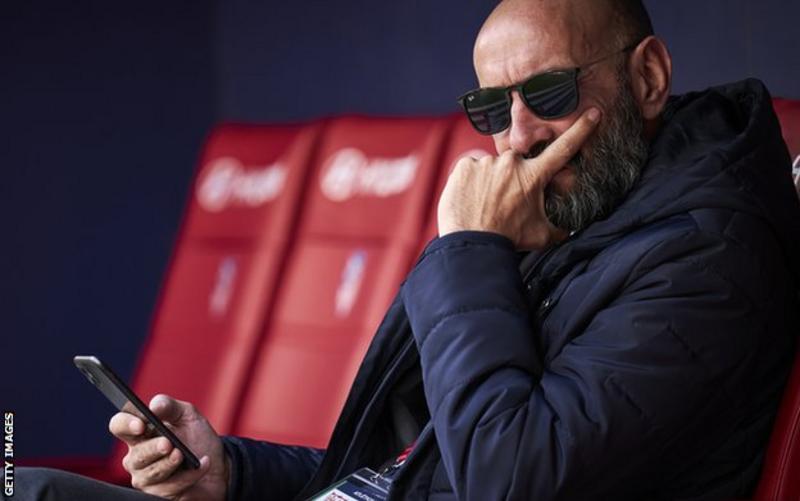 But big transfers remain the strategy favored by many others.

That’s the case of Chelsea, who drew 0-0 with Sevilla in the club’s earlier Champions League meeting at Stamford Bridge this season. Kai Havertz, Hakim Ziyech, Timo Werner, Ben Chilwell, and Edouard Mendy – signed for a total of around £222m this summer – could all feature at the Ramón Sánchez Pizjuán on Wednesday evening.

“I would like to believe the Chelsea directors are perfectly aware of their finances and their earning capacity, I’m convinced they are,” Monchi says. “If you make an investment it’s because your budget allows it.

“Chelsea spent the last few years kind of hidden in the football market (in part perhaps because of their transfer ban), but they have done some very good deals. Young players with a great projection that will prove profitable, on and off the pitch.”

After 20 years of making tough decisions, Monchi claims to know how to withstand the pressure. He is happy in his work and still feels he has plenty to offer. But he has already started to think about the timing of his own next transfer.

“I owe my family, my friends, and myself too,” he says. “I need to give that time back to them. Including me. That’s why I won’t be here for long. Everyone else comes second. I’ve known my wife since we were 15. My children, aged 27 and 21, were raised in these circumstances. I prioritize the club so much that I sacrifice my well-being. But I consider myself privileged. I’ve been doing what I dreamed of when I was a kid.

“Six hours of sleep is enough for me. I get up early to exercise, but during this time I’m also working since my smartphone and my computer is on. Disconnection doesn’t make sense in my position. This will last as long as I feel happy. I haven’t marked a date on the calendar. Today I come to work with the same ambition. I will walk away when I feel anxious when I open my office door.

“I’m lucky to have friends who don’t get mad when I promise to call back… and I do it five days later.”

13 Job Skills That Employers Value: Most In-Demand Skills To Know

Work Smarter, Not Harder With This Data-Focused Excel Training Course